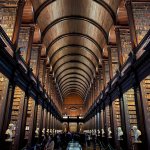 Dublin is the jewel of the Emerald Isle and not just because it’s Ireland’s capital and largest city.  Humans have lived in the area since prehistoric times, but it was roughly the 7th Century before people really started to build a settlement around what would become Dublin Bay on the Irish Sea.  Ever since it has been the center of culture and history for the nation and today … END_OF_DOCUMENT_TOKEN_TO_BE_REPLACED