Plaque to Irish woman who shot at Mussolini unveiled in Dublin 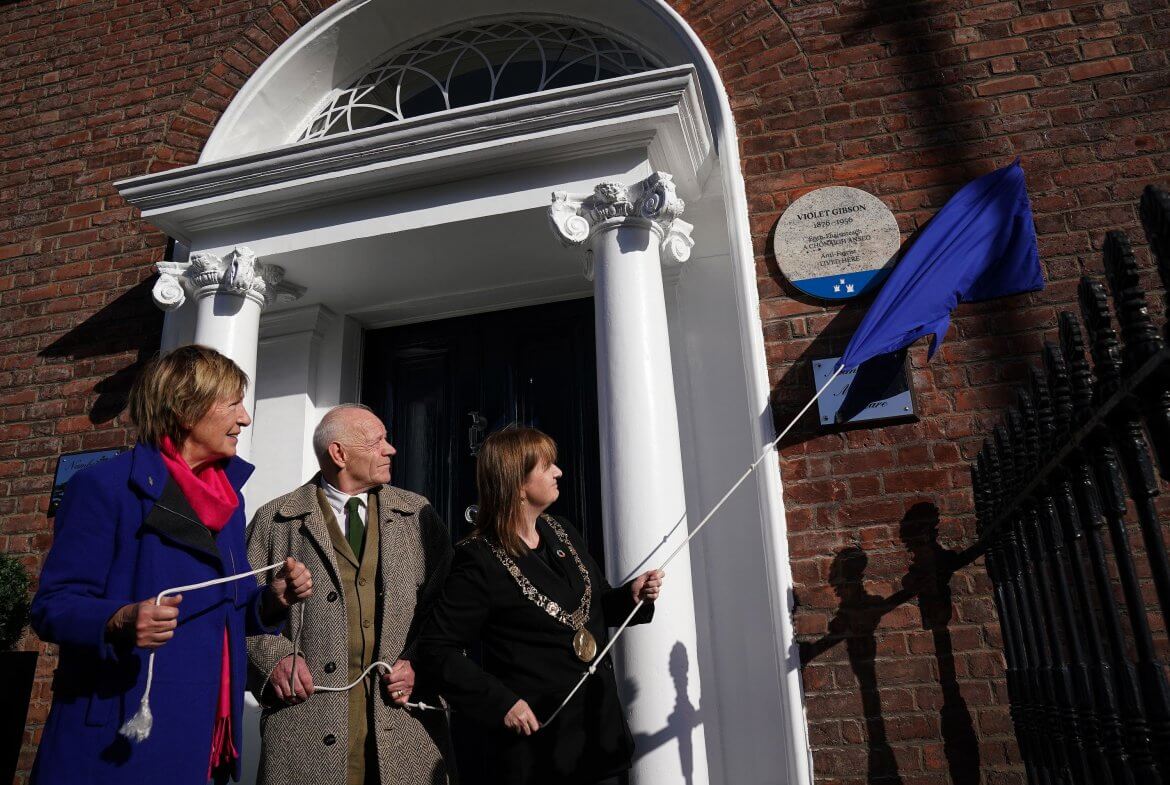 A plaque commemorating the Irish woman who shot at Italian dictator Benito Mussolini has been unveiled at her childhood home in Dublin city.

On April 7 1926, three years into Mussolini’s fascist rule of Italy, 49-year-old Violet Gibson drew a pistol and shot at Mussolini at point blank range as he walked among a crowd in the Piazza del Campidoglio in Rome.

Mussolini moved his head as she shot and the bullet grazed his nose.

Following her attempt on Mussolini’s life, Ms Gibson was placed in an asylum in England, where she died aged 80 in 1956.

A commemorative plaque was unveiled at 12 Merrion Square in her honour on Thursday.

Writer and producer Siobhan Lynam, whose 2014 RTÉ radio documentary ‘The Irishwoman Who Shot Mussolini’ highlighted Violet Gibson’s story, said that for nearly a century Ms Gibson was “a mere passing footnote in the history of Italian fascism”.

She described Ms Gibson as “a highly intelligent, artistically gifted, well-travelled and bold-thinking woman”, who had a “strong commitment to social justice and was an avid pacifist”.

Recalling the moment where the course of history could have been changed, the crowd gathered outside Ms Gibson’s family home on Thursday heard that she’d been keeping notes on Mussolini’s movements before attending the public plaza with a gun wrapped in a shawl.

Ms Lynam said Mussolini was there “soaking up the adoration of the crowd” after speaking at a conference of surgeons.

“And she took the pistol and a point blank range and shot at him.

“But just as she fired the gun, he turned his head because the students had burst into the fascist hymn Giovinezza.

“She took a piece off the end of his nose, he turned around, face pouring blood.”

She tried to shoot him again but the gun jammed.

“So this disheveled, grey-haired, five-foot-one Violet, the crowd just set upon her and the police jumped in and arrested her.

“Mussolini was shocked that a woman would shoot him, and then: an ugly old woman and a foreigner.”

She said that headlines around the globe and world leaders condemned the attack, including WT Cosgrave, the president of the executive council of the then-Irish Free State, who called it an “odious attempt”.

Ms Lynam said that Ms Gibson was judged as “a mad Irish mystic” and “a crazy Irish spinster” by a world who thought Mussolini was “perfectly sane”.

Speaking at the unveiling, Lord Mayor Caroline Conroy said that the plaque was part of efforts by Dublin City Council to put a focus on the women in Ireland’s history.

Of 45 plaques that have been erected to commemorate those who have contributed to Dublin city, only seven commemorate women, she said ahead of the unveiling of the plaque.

“We all know that over the years, the role of women in our national life, in the story of our city, has not been given the attention it deserves.

“We in the city council and have been working through our various activities to put a focus on women in history,” she said.

Dublin councillor Mannix Flynn, who proposed the plaque for Ms Gibson, was also present at the unveiling.