Jimmy Nesbitt: Debate on NI’s future should be led by people not politicians – Report on Irish Unit Rally in Dublin 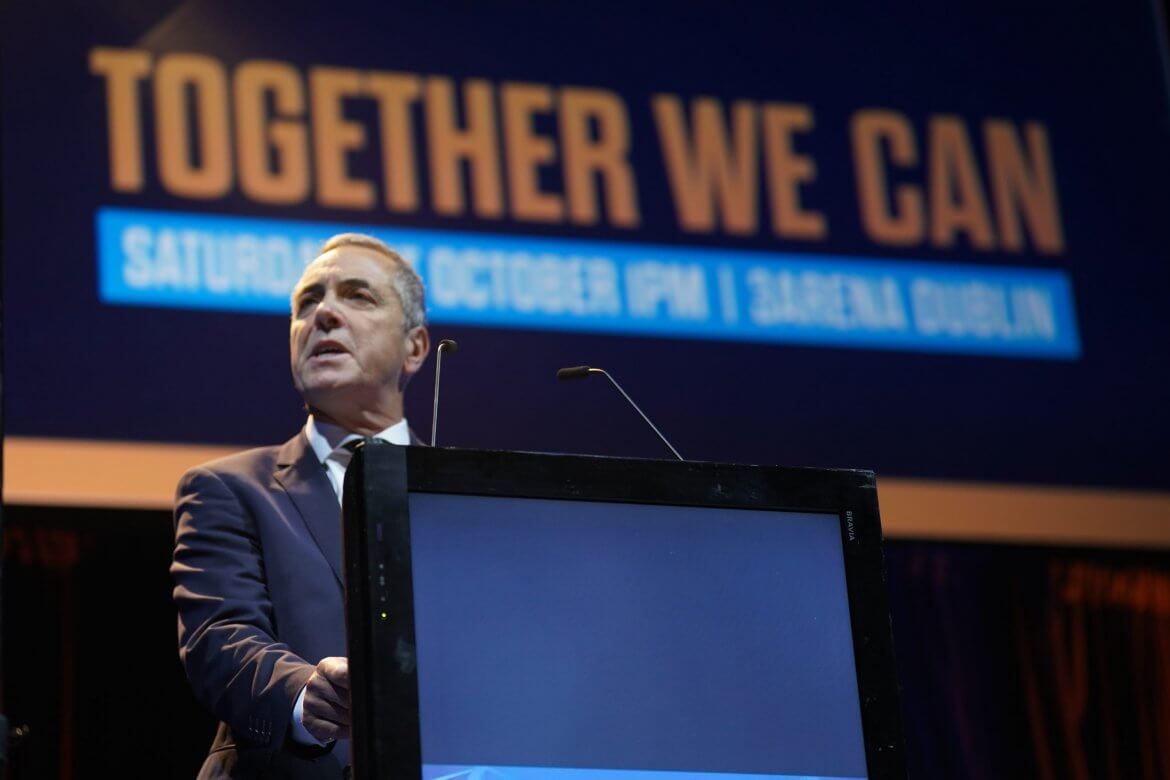 Actor Jimmy Nesbitt has said the debate about Northern Ireland’s constitutional future should be led by people rather than politicians.

The Cold Feet actor was the keynote speaker at a major rally on Irish unification in Dublin on Saturday.

Nesbitt, who comes from a Protestant/unionist background in Co Antrim, told the Ireland’s Future event he remains unsure about the arguments advanced by nationalists but said he was open to an informed discussion on the issues.

He told an audience of around 5,000 people inside the 3Arena that the phrase “united Ireland” was viewed by some unionists as incendiary and suggested the term “Union of Ireland” might be more palatable as a concept for people from his community.

“I suppose to many from my background talk of a united Ireland is difficult, but the conversation is out there.

“I prefer something like a new union of Ireland where people from the north, particularly those from my tradition, would feel that they have their identity, that it is in no way threatened, that they have an equal voice, that they are part of a society that is progressive, inclusive, diverse.

“That they have prosperity, that they are not marginalised, and that they can be proud to be from the north of Ireland in a new union of Ireland.”

He suggested the time could be right to view the debate in a “post unionism and post nationalism” context.

“I know many northern Protestants are open to this. Among my friends, who are all lads who are Protestants – well, men, we are all in our mid-50s looking down the barrel of 60 – they would really consider now what the notion of a new union of Ireland might look like, and I think there’s a lot of people that think that.

“Me, I am still not entirely sure because I don’t know enough about what a new union of Ireland would look like.

“I am certainly very keen on embracing anything in which the relationship between the people in the north is improved, and between north and south and between these islands, and it strikes me that I think a lot more people are coming round to the idea of just even considering themselves Irish.”

He added: “I believe, I firmly believe that we need to bring this discussion out of the Dail, out of Stormont, out of Whitehall, out of academic fora and into the village halls and town halls, the church halls, the Orange halls.

“Solutions must emerge from a public discussion of the options for the future constitutional governance of the island and its relationships with our friends in the rest of the British Isles and in the European Union.

“I would also include in that discussion the Irish diaspora across the world – a debate that I do not believe we have ever had.

“Politicians may point to a political mandate giving them the power and responsibility to lead but people can only vote for what is in front of them on the ballot paper. I believe that it is time to ask wider society, outside of the ballot box, what way it wants to be governed.”

He added: “In my view we have for too long focussed on the differences that keep us apart and failed to explore the common ground, those views, issues, problems that we share.

“As a society we need to build on that common ground, explore what a shared island means and let any discussion on future constitutional arrangements emerge.

“A border poll may well be inevitable but if it is going to happen let it happen after an informed debate and not just when the numbers are right.”

Ten political parties were represented, with the leaders of five addressing the audience.

Unionist parties from Northern Ireland did not attend. The cross-community Alliance Party at Stormont also did not participate.

Mr Varadkar said a united Ireland would only succeed if its creation is endorsed by strong majorities in both the north and south of the island.

The Tanaiste said while “50% plus one” was enough “on paper and in a law” to win referenda on unification, he said in reality such a margin would “not be a recipe for success”.

He said “compromise” would be needed when it came to designing the shape of a united Ireland, suggesting that a devolved parliament at Stormont could be retained in a new state, with Northern Ireland also having a separate police service, health service and education system.

Mr Varadkar, who will again become Taoiseach in December, said “cross-community engagement” both within Northern Ireland and between north and south was currently “far short” of what would be needed to build a “new Ireland”.

The Fine Gael TD, who has made clear he does not think the conditions are right for a border poll, said there was danger of placing too much focus on a referendum, when the priority should be on trying to increase engagement and build trust.

“We can’t build our future based on narrow majorities or on the wishes of just one community,” he said.

“For these reasons, I believe our objective should be to secure as large a majority as possible in both jurisdictions in any future poll.

“50% plus one may be enough on paper and in law, and I don’t dispute that for a moment, but a majority so narrow is not a recipe for success.

“Our only hope depends on presenting a proposal – north and south – that will be able to achieve democratic consent and this will involve compromise.”

However, Ms McDonald said the days of “treading water” on planning for Irish unification are over.

The republican leader said those who said it was not the time to start preparing for constitutional change had “long lost sight of the bigger picture”.

Ms McDonald reiterated her call for the Irish government to establish a citizens’ assembly to discuss issues about how a unified Ireland might work.

“Ireland’s future will be determined by choices made today, by decisions of this generation,” she said.

She added: “Those who say ‘yes, but not now’ have long lost sight of the bigger picture.”

The stated aim of Ireland’s Future is to promote debate and discussion about what a united Ireland would look like. It is campaigning for a referendum on reunification.

The group contends that Brexit has created a fresh impetus for constitutional change, with more people looking at unification as a way to mitigate the consequences of the UK’s departure from the EU.

Titanic Pumphouse set for new lease of life as distillery