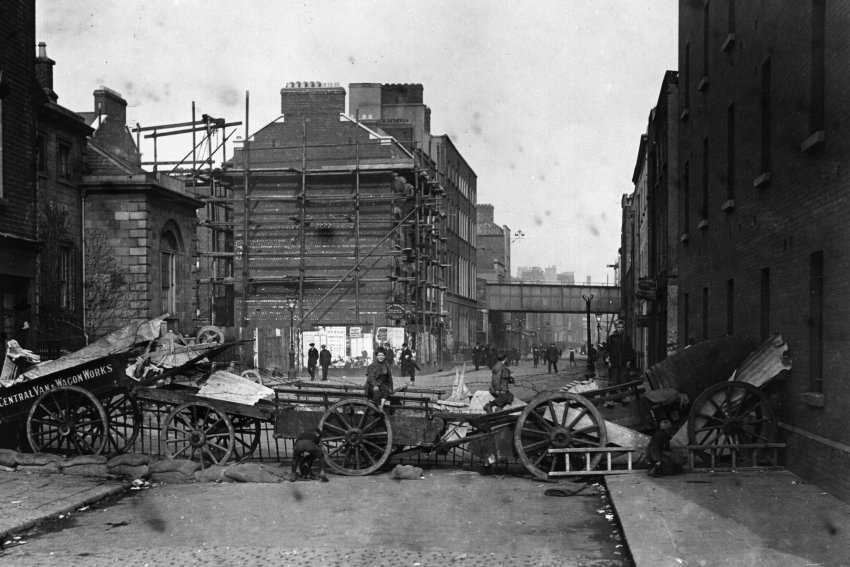 Ireland is a country with a long and proud tradition.  People have been living on the Emerald Isle since before recorded history and in many ways, Ireland’s story has seemingly been one of constant struggle.  Whether fighting against the Romans, the Vikings, the Normans, or the English, the more peaceful moments of the modern era have been the goal Ireland has long struggled to reach.  In this struggle against forces whether man or nature, Ireland has defined itself as a place full of resilient and hospitable people whose attitudes are never defeated.  We’ve outlined ten of the most important moments in Irish history below and while this list is limited, you can let us know what you think are Ireland’s biggest events in the comments.

The Easter Rising was a short-lived insurrection lasting six days around Easter week 1916.  It was the hope of Republicans to begin a rebellion while the UK was busy fighting World War I.  Beginning in Dublin and spreading to other parts of Ireland, it was put down swiftly.  Fifteen leaders of the Irish Republican Army who were amongst those arrested were executed in the yard of Kilmainham Goal over a period of nine days.  Whereas the public had a negative opinion of the rebels before, the executions further inflamed animosity against the English and gained sympathy for the rebels, leading to open rebellion a few short years later.

9. Daniel O’Connell and the Catholic Emancipation

For a long time under English rule, Ireland’s Catholic faith had been repressed along with much its culture.  In the early 19th Century, Daniel O’Connell was a political leader who saw a unification of Catholicism and Irish identity, and so argued for Catholic Emancipation including the right of Irishmen to sit in Parliament and the repeal of the Acts of Union.  He also led the Catholic Association, growing them into a mass movement that brought Irish people together and made the UK nervous.

8. An Argument on Behalf of the Catholics of Ireland

Wolfe Tone was another Irish revolutionary leader who rose to prominence roughly forty years before O’Connell but with the same vision of an emancipated Ireland.  Tone wrote the pamphlet “An Argument on Behalf of the Catholics of Ireland” in 1791 conceiving of a united Ireland, which got the attention of a group of similarly-disenfranchised Presbyterian merchants who formed the Society of United Irishmen, a group that looked past the differences in the Irish people to work towards a common goal of independence.

7. The Battle of Aughrim

The last major battle of the Williamite War, what remained of the Irish Jacobites who supported King James II fought the forces of King William III at Aughrim and lost.  Supporting James for his Catholic leanings, the defeat of the Jacobites ensured a harsh response from the Protestant English king including the further suppression of Irish Catholics.  Between the political aftermath and the loss of approximately 7,000 soldiers, for years it became a symbol of defeat.

6. The Sack of Drogheda

Oliver Cromwell is not a beloved figure in either Great Britain or Ireland, though the latter is quite likely where the hatred for him is strongest.  In another conflict in which the Irish fought on the losing side, Ireland supported Royalist forces and for their efforts, Oliver Cromwell landed in Ireland in 1649, marching to the port of Drogheda where his forces massacred 3,500 people.  Cromwell continued his campaigns against the Irish people such that by 1660, one-fourth of Ireland’s population was dead from the fallout of war and disease that ravaged the land.

5. The Plantation of Ulster

An important moment to both Irish and American history, the Great Famine struck in 1845 as disease virtually wiped out the potato crop, then a staple of the Irish economy.  In the four years that the blight affected Ireland, about one million of the island’s population of eight million died.  Thousands left Ireland altogether and emigrated to the United Kingdom, Canada, and the United States, contributing to large Irish populations in cities such as Liverpool, Toronto, Chicago, Boston, and New York.  The population that was left remained in decline for decades after the famine ended.

While not an immediate consequence of the Norman Conquest of England, by the time of King Henry II, Anglo-Norman raiders were already beginning to make advances on Ireland.  In 1169, Dermot MacMurragh enlisted the aid of Anglo-Norman mercenaries to help take back his Kingdom of Leinster, but this merely led to an even greater number of Normans crossing the Irish sea to start conquering the island.  In 1171, Henry decided to add Ireland to his ever-expanding empire and the result of his conquest was a nearly-800-year period of English rule.

1919 saw the escalation of rebellions into open warfare between the Irish Republic Army and British forces.  Over a two-year period, a campaign of guerilla attacks by the IRA and the development of an independent Irish state by the Dail Eireann led to a collapse of British authority throughout much of Ireland.  In 1921, the Government of Ireland Act effectively gave the Republic of Ireland its independence while partitioning Northern Ireland which was still largely loyal to the United Kingdom, bringing us to the geographic and political situation that exists today.

1. The Coming of Christianity and St. Patrick

Arguably the most important thing to ever happen to Ireland is the island’s conversion to Christianity, due in large part to St. Patrick.  Christianity had predated Patrick’s efforts going back to 432 AD with the coming of Bishop Palladius, and historians debate Patrick’s arrival to a few years later, but Patrick’s missionary attempts were arguably the most successful.  The conversion of Ireland led to the island becoming a predominately Catholic state, which would become a major part of its identity while Patrick would become Ireland’s patron saint.