Top Ten Most Interesting and Beautiful Ruins to Visit in Ireland 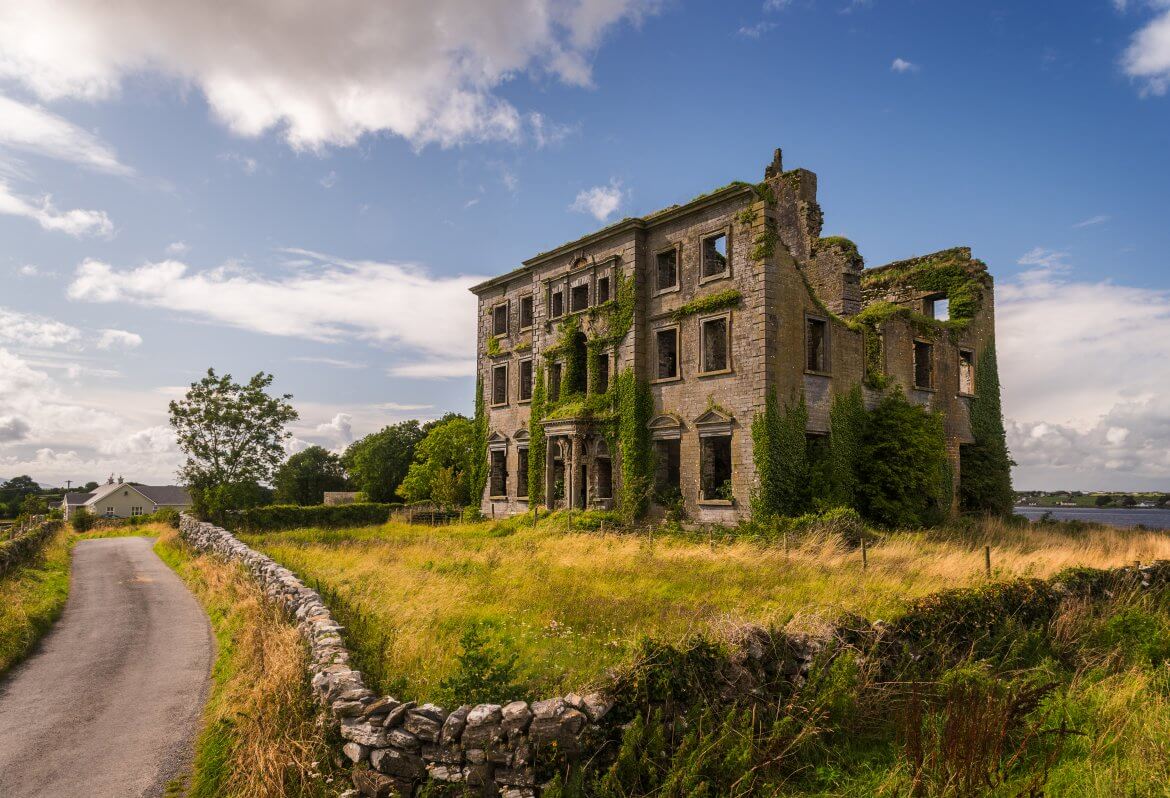 Ruins have something of a tragic beauty to them.  They represent once-great buildings and individuals and the societies that built them.  However, they are long past their prime, abandoned by circumstance and time and slowly crumbling away.  Like many places throughout Europe, Ireland has its share of ruins that dot the landscape.  They tell the stories of the ancient Celts, the Church, and lords long gone.  We’ve identified the top ten ruins we think you should see below, but since this is not an exhaustive list, you can feel free to let us know some of your own favorites in the comments.

Carrowmore may not seem like much at first, but it is evidence of some of Ireland’s earliest inhabitants, a Bronze-Aged cemetery, spread amongst the fields near the town of Sligo.  The Knocknarea hill burial site is also nearby and features a large Neolithic tomb that legend claims to be the final resting place of Queen Maeve, the warrior queen of Connacht from myth.

William Duckett built the estate house at Duckett’s Grove in 1830, originally in a Georgian design but was later renovated into its present Neo-Gothic state.  The Duckett family left the house in 1916 and it was well-preserved by an agent and the local farmers until a fire of unknown cause destroyed much of the interior in 1933.  Today, work to preserve its gardens is ongoing and the courtyard hosts tea rooms and regular events that are open to the public throughout the year.

Our first church building on this list is one that has held up extremely well over time.  It was a Franciscan friary from its founding in 1448 even through the Dissolution of the Monasteries until the Commonwealth period under Oliver Cromwell.  This might explain why the ruins have been so well preserved over the years and the courtyard features a yew tree believed to be as old as the abbey itself.

Built in 1779, Tyrone House was the estate of Christopher St. George but was abandoned by the beginning of the 20th Century.  During the Irish War of Independence, the house was burned by the Irish Republican Army after rumor spread the Black and Tans were going to use it as an infirmary.  As such, the interior of the home is completely gutted and only the walls remain.

Dunluce Castle was once the seat of Clan McDonnell, the Irish branch of the Scottish Clan Donald and the castle building itself dates back to roughly the 16th Century.  It’s had quite an interesting history, though the legends concerning it are equally interesting and say that it became abandoned after the kitchen fell into the sea and the owner refused to live there.  Game of Thrones fans will note that it also serves as the stand-in for the Greyjoy castle Pyke.

One of the oldest burial grounds in Ireland, Newgrange is a World Heritage Site that is well over 5,000 years old, older than Stonehenge and the Pyramids of Giza.  It has played a role in both history and mythology, believed to be the home of the pre-Christian deity Dagda and his sons.  The inner carvings are a beautiful example of prehistoric Celtic art, which is best illuminated by the rising sun on the day of the Winter Solstice.

Skelling Michael is a two-pinnacled crag off the coast of County Kerry was home to a 6th Century monastery that has long since been abandoned.  The monks left the island in about the 13th Century when living conditions became too harsh to support the community and it was taken into State ownership in the 19th Century, later becoming a World Heritage Site in 1996.  Star Wars fans will certainly want to make a pilgrimage here as it played the role of Luke Skywalker’s retreat in the new trilogy.

One of the most interesting ecclesiastical ruins is that of Fore Abbey.  It was once a Benedictine monastery built in 630 AD, rebuilt in the 15th Century, and lasted until 1539, when it met the fate of many Church buildings during the Dissolution of the Monasteries.  It has had a fascinating history from the raids by Vikings to the final one made by King Henry VIII’s forces.

Also known as the Cashel of the Kings and St. Patrick’s Rock, the Rock of Cashel was the seat of the kings of Munster for hundreds of years until the Normans invaded.  In 1101, the then-current King of Munster donated the castle to the Church which later built Cormac’s Chapel and the Cathedral.  It is home to some of the finest examples of Celtic art in the country and that, along with its history, are worth discovering.

Blarney Castle is undeniably one of the top tourist attractions in all of Ireland.  The current castle was built around 1446 and then confiscated by the supporters of King William III, after which time it passed through a series of owners.  Parts of the castle are now in ruins, but the battlements and some of the rooms are intact, as is the castle’s biggest draw—the Blarney Stone, believed to give the “gift of gab” to whoever kisses it.

Article: I moved from the US to Ireland. Here are 11 things that surprised me most.