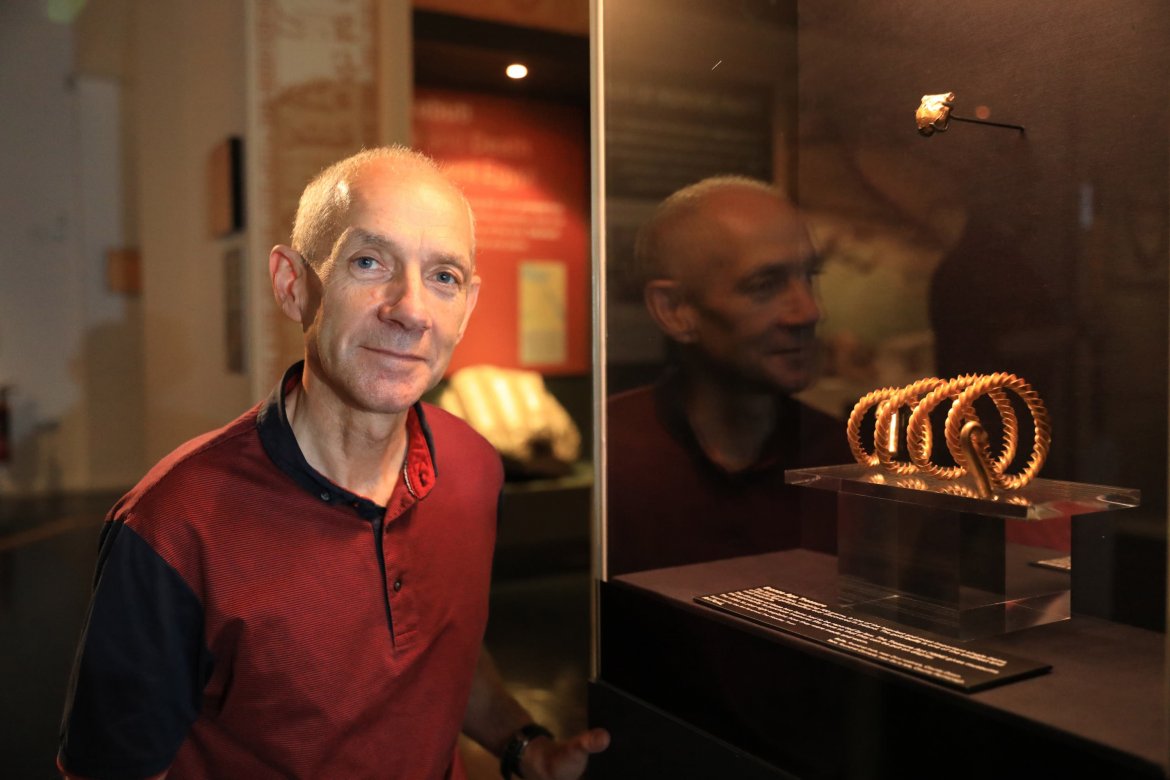 Ireland has been recalled as the El Dorado of western Europe for the quality and quantity of goldwork during the Bronze Age.

The comment came as the first six of 10 cases of potential treasure were considered at Belfast Coroner’s Court.

They were the first treasure trove inquests to be heard in several years due to the coronavirus pandemic.

The final hearing of the day heard how Christopher Martin found the sleeve fastener around seven inches under the surface while using a metal detector in a field close to Narrow Water in Co Down on September 8, 2019.

The item was described as “relatively small”, around 3cms in length, consisting of a semi-circular bow at either end, with a curved fastener.

“This is really, really good quality gold,” he said.

“There are probably in the region of 100 sleeves fasteners from Ireland, and it is an exclusively Irish type, we’re not finding these objects on the continent.

“The goldsmiths in Ireland had a good reputation for producing high-quality gold work. Ireland at one stage was called the El Dorado of western Europe because of the quality and quantity of the gold work.

“The term sleeve fastener is an antiquarian term, and became more popular in the 1960s. The idea was that it maybe acted perhaps like a cufflink, used to go through two slits and hold the cloak closed together, but we don’t know exactly how it worked.”

Coroner Anne-Louise Toal described it as a very beautiful piece, and declared it as treasure.

Earlier, three lots of items found by another metal detector enthusiast, Ryan Shiels, were declared to be treasure.

He described how it has been a hobby for him for around six years, usually going out three days a week weather permitting.

On April 3, 2019, he found a piece of a Bronze Age gold ring in a field close to the Co Down coast just south of Downpatrick.

On April 10, in the same field, he found 12 medieval silver coins.

And when he returned to the same field on April 15, he found more silver coins.

Mr. Ramsey described the broken piece of the gold ring as like a broken section of a polo mint, adding it was analyzed as 69% gold, 24% silver, and 4% copper.

He said it was dated to around 1290-104BC and may potentially have been hair rings, as seen on wigs on Egyptian tombs or an earring or nose ring.

The axes were also dated to the Bronze Age.

Of the other items, Mr. Ramsey said the 21 silver coins include 15 silver pennies marked with Edward II and six silver groats with Edward III. He said they dated between 1279-1377.

He said why coins were buried remains a matter of speculation, perhaps buried at times of trouble in times before banks.

He described the Anglo-Norman settlement in the area, with a 12th-century motte, and two medieval tower houses.

Meanwhile, the Agnus Dei pendant was found in Lisnamallard, Co Fermanagh on November 13, 2018.

Mr. Ramsey described it as around 3cms in diameter bearing the symbol of the lamb of God, and likely to have been intended to be worn on a chain or piece of leather around the neck.

He said it was measured as having a silver content of around 89%, adding it was probably made around the 15th or the 16th century.

“Agnus Dei pendants were originally designed to hold the wax from what are known as pastoral candles… the candles symbolized the light of Christ and they were lit at Easter on Holy Saturday and extinguished on Easter Sunday. The wax was believed to hold some kind of symbolism and power,” he said.

“The pendant is intended to be sealed but when you shake it now it rattles a little bit so we are guessing the internal contents are part of the dried wax.

“Perhaps this was a pendant belonging to a pilgrim who was traveling to St Patrick’s Purgatory in Lough Derg, Co Donegal.”