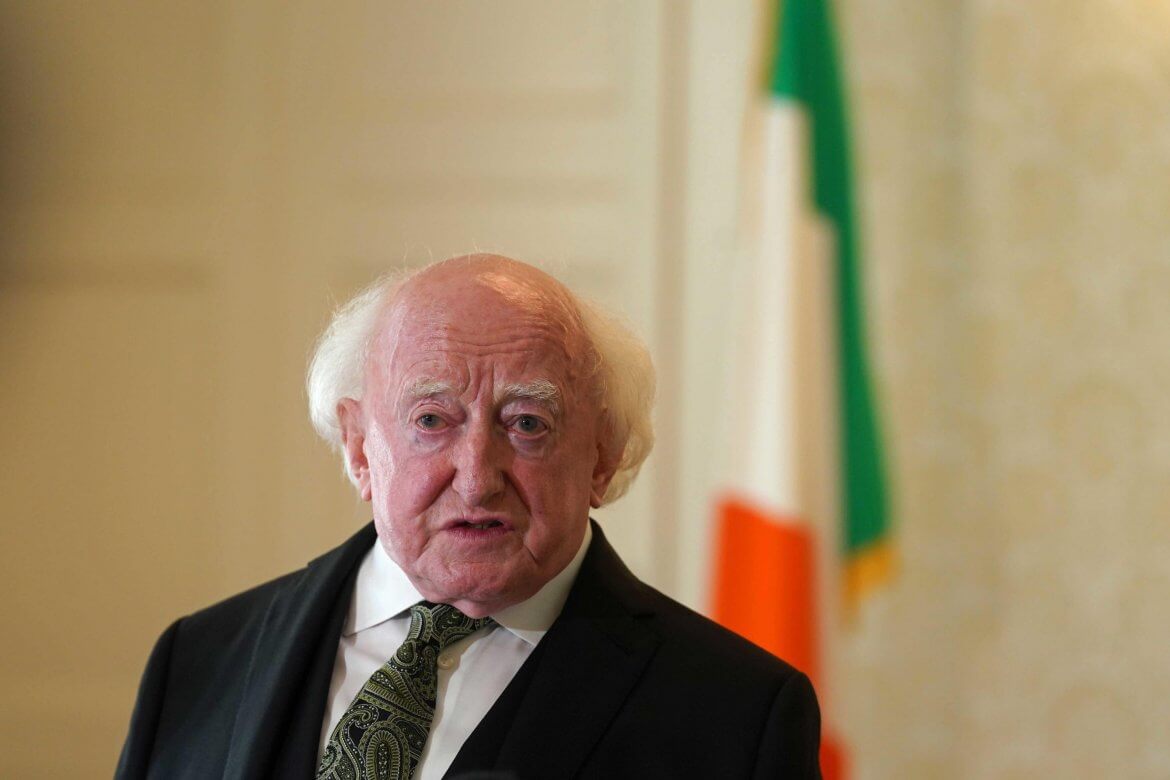 Ireland’s president Michael D Higgins has remembered the “extraordinary” warmth and “charm” of the Queen as gifts from the late monarch to the Irish state were put on display at his official residence.

Speaking to reporters at Aras an Uachtarain in Dublin, he said the Queen’s words during her historic 2011 visit to Ireland – that past actions should have been “done differently or not at all” – had been a “powerful statement”.

“That was a fairly straightforward statement about ‘let us not be trapped in categories,” he said, adding that this was coupled with a “deep, sustained interest” in Ireland.

Mr. Higgins said they had discussed how empires leave, and commented that “it’s not just about the armies leaving, it’s about mindsets as well, and it’s about new arrangements.”

“I think in my statement yesterday I mentioned the particular interest her majesty had in matters Irish and the incredible importance of her visit in 2011, but also the great warmth with which she and Prince Philip received Sabina and I when we returned to visit in 2014.”

He said that her warmth was “incredible” and “real”, and that he was impressed by her commitment to the “continuity” of Anglo-Irish relations.

“The warmth was real, (as were) the questions that she asked me, including questions which we discussed about Irish history,” he said.

“That I have been emphasizing today: the ability to be able as it were for 70 years to engage with 14 prime ministers, now 15, and at the same time to be able to do so not only with great dignity and with very well informed knowledge of the complex nature of things that were going on – but to be able to do so and at the same time retain all of the charm and extraordinary warmth which I think she showed not only to us but she showed to her people and which I think is reflected very very much in the reaction not only in Britain but abroad.”

Mr. Higgins gave the statement on Friday evening, next to a table where gifts and letters from the late monarch were laid out on a table.

These included a copy of the Dubliners given to Mr Higgins during his 2014 visit to Windsor Castle, where the president gave the Queen a statue of the Irish racehorse Arkle.

The letter from the Queen, inviting Mr. Higgins and his wife to visit Windsor Castle was also on display, as well as Mr. Higgins’s reply.

A silver baluster jug engraved with the Irish harp on one side and the British royal cypher on the other was also on show; gifted by the Queen to then-Irish president Mary McAleese during her 2011 visit.

Earlier, Irish premier Micheal Martin said that this visit had been “the crowing moment” of the peace process and the development of Anglo-Irish relations.

The Taoiseach said that the Queen had been a constant in the world political order and expressed Ireland’s understanding of the “enormous change” her passing represented.

Tributes have poured in from across the world upon the death on Thursday of Britain’s longest-reigning monarch, who served as the UK’s head of state for more than 70 years.

Speaking to reporters in Bray, Co Wicklow, Mr. Martin said that the Queen’s most enduring legacy in an Irish context would “unquestionably” be her visit to Ireland in 2011.

He said that her trip to Cork as part of that visit would be “a visit that will never be forgotten.”

Political leaders in Ireland have noted how the Queen’s 2011 visit, the first by a British monarch to Ireland since it gained independence, set a new tone for Anglo-Irish relations in the following years.

Mr. Martin said: “In the context of all that has gone on between Britain and Ireland over the centuries, (the visit) definitely closed one chapter and opened up a new chapter, and it was the culmination really of all the work that went into the peace process and the Good Friday Agreement.

“The head of state of the UK coming to Ireland represented the crowning moment, if you like, for all that had gone before in terms of peacebuilding and in terms of creating a new political order on the island of Ireland.”

Mr. Martin said of the new British monarch: “I think King Charles is very familiar with Ireland, he has a keen interest in Irish affairs, and I met him on a number of occasions during his visits to Ireland, with the Queen Consort, and I have no doubt that he will continue that interest in Ireland.

“Particularly, he has an interest in climate change, biodiversity, wildlife, and I do foresee opportunities to dovetail with that interest that he has, with some of the initiatives we are taking in terms of preserving biodiversity into the future.

“He’s also obviously committed to doing what he can in the role that he now will have, to underpin good relations between Ireland and Britain and between the different traditions on the island of Ireland.”

He said that inviting the King to Ireland would be a matter for the president.

Later on Friday, Mr. Martin joined people traveling to Dublin’s British embassy on Merrion Road to sign a book of condolence. It is one of a number of books that have been opened across the island.

Outside the gates of the embassy, flowers and messages of sympathy had been left by members of the public.

Baitriz Sousa, from Brazil, was among those who stopped to look at the flowers.

The homecare assistant, who lives in Dublin, told the PA news agency: “I just stopped by and saw these very beautiful flowers.

“It’s really beautiful how people show their kindness for the Queen.

“In Brazil, we always saw the Queen as a symbol. It’s really important to see a woman Queen and for so many years, so respectful.

“Now we won’t have a Queen for a long time because now the line to the throne is all men.”

Pensioners Roisin and Josephine Gavigan said they had come to sign the book of condolence and pay their respects “to a wonderful woman”.

They said the Queen’s “graciousness” was her best trait, and that they would remember her as always smiling.

Josephine said: “We came out of respect for her.”

Her sister Roisin added: “She’s our own vintage and we both worked in England for a while. We always admired her.

“I was very sorry to hear of her death. She certainly did great work for Irish relations, the time she came over to visit.”

Both historic and very ordinary: the Queen’s 2011 visit to Ireland