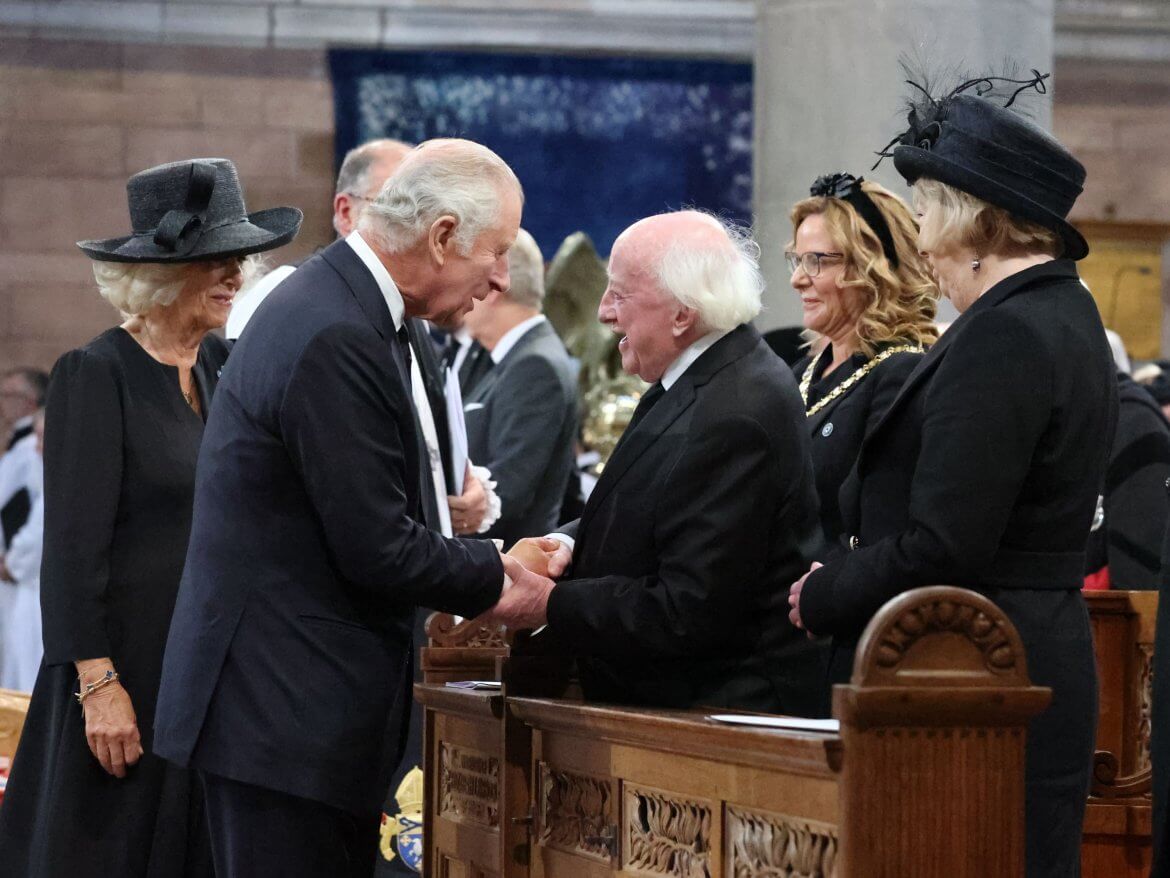 It was more than a simple gesture; it was a statement of intent.

When the King turned to leave St Anne’s Cathedral, he crossed the aisle and made a beeline to the President of Ireland Michael D Higgins and warmly clasped his hand.

The two heads of state, who have developed a strong personal relationship in recent years, are keenly aware of symbolism.

The example set by the late Queen and Mr Higgins’ predecessor Mary McAleese, during visits to their respective countries, is clearly one they are keen to follow.

If protecting Anglo-Irish relations amid the ongoing turbulence of Brexit is a priority for them both, their friendly encounter at the close of Tuesday’s ecumenical service in Belfast offered ample evidence of it.

Only a few paces away stood Prime Minister Liz Truss and Taoiseach Micheal Martin, two leaders who will have pivotal roles if the thorny impasse over the Northern Ireland Protocol is to be settled.

The pair had earlier spoken intently as they waited for the service in the cavernous Anglican cathedral to begin.

It was almost as if the seat planner was keen to get some conversations going.

The watching elected representatives were certainly left in no doubt that the King and President are intent on strengthening the British Irish bond, irrespective of recent political strains.

Earlier, the King and the Queen Consort were met with cheers as they arrived at the cathedral for the service in memory of the Queen.

Dozens of students, cadets, scouts in their uniforms, as well as charity workers, were among those who gathered opposite the cathedral and waited in the hot sun to catch sight of the new monarch.

The crowds cheered and sang God Save the King as the royal motorcade arrived.

As the new King ascended the steps of the cathedral, he turned and waved to the crowd that had waited to see a moment of history.

Students from Belfast Royal Academy Kaitlyn, 17, Lucy-Beth, 17, and Sophia, 18, were among those invited to gather at the metal barricades at St Anne’s.

“It’s a historic moment,” said Sophia, with Lucy-Beth adding that it was “bittersweet” coming to see the new monarch while also mourning the death of the Queen.

“He waved and seemed interested. It was nice to see he appreciated the crowd,” Kaitlyn said.

Florence, 17, from Bloomfield Collegiate School, said it was a “monumental” occasion and very symbolic to have Ms O’Neill and Sir Jeffrey unite in showing their respects to the late Queen.

She said that a couple of decades ago no-one would have expected such unity.

Following the service, the Royal couple emerged into the blinding sunshine to a rousing rendition of God Save the King.

Charles and Camilla then greeted the well-wishers that had waited outside shaking hands and exchanging a few words with people who expressed their condolences to the new King.

Carol Williams, from Atlas Women’s Centre in Lisburn, was among those who shook his hand.

“It was wonderful because we thought it was going to be very long today but it has passed so quickly,” she said.

“And we were right at the front and we got to shake hands with both of them. That was lovely.”

She added: “I think he’ll make a wonderful King. I think he’s had a great role model because of his mother, and he’s had plenty of time to watch her, and know how to deal with things and I think he’ll be great.”

Gay Sherry-Bingham and Mandy Gilmore, from Atlas, said that when they shook Charles’ hand, he recognised them from having met them twice before.

“He spoke to us and said how lovely Belfast was and as he was walking past, one of our other colleagues heard him saying, ‘my two supporters’,” Gay said.

Mandy added: “And he said thank you for being here and thanks for your support, very thoughtful.”

When asked whether he’ll be a good king, they answered in unison: “Absolutely.”

Among the young people who met Charles outside the cathedral was Noah Workman, a member of a junior Orange Lodge in the Ballynafeigh district of south Belfast.

“I was really excited. I wasn’t expecting to get really close to him,” said nine-year-old Noah, who was wearing his orange collarette.

“He’s an amazing person, so kind, he’s going to be one of the greatest kings that have ever been.

“It’s been the most amazing day for all of the people around the world.”

For Karen McShane, a trustee of the local LGBT charity the Rainbow Project, it was “a very important day for Belfast”, and the unity shown was a signal of hope for the future.

“The atmosphere here today was very relaxed,” she said.

“A lot of people think of Belfast as being quite tense and quite difficult. But everybody is here today with the same agenda. We all wanted to see something positive as a result of the King’s visit today.

“And I for one, from a nationalist community, am very glad to have been invited along to be able to support that message.

“There was a couple of hundred people here invited in front of St Anne’s Cathedral to participate in proceedings today.

“They were very keen to pick up on the symbolism of what was involved today.”

She said it signified a positive direction for Northern Ireland.

“For too long we have been two different societies, yet we all occupy this one island, and this one area of Northern Ireland,” she said.

“We have to be able to live together.

“Hopefully today is the symbolism of King Charles now moving forward to try and unite those two different sides of the community.”

Both historic and very ordinary: the Queen’s 2011 visit to Ireland

Q&A: What is the Northern Ireland Protocol Bill...